You are here: Home / Archives for multiple sclerosis 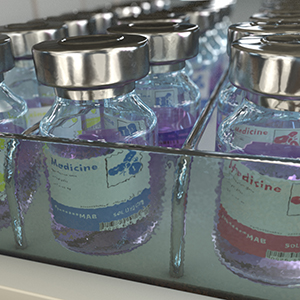 On December 28, 2022, the U.S. Food and Drug Administration approved BRIUMVI™ (ublituximab-xiiy), for the treatment of relapsing forms of multiple sclerosis (RMS), to include clinically isolated syndrome, relapsing-remitting disease, and active secondary progressive disease, in adults. [1]

Ublituximab (TG-1101) is a chimeric anti-CD20 IgG1k antibody glycoengineered for enhanced antibody-dependent cell-mediated cytotoxicity (ADCC) that was originally developed by LFB Biotechnology and licensed to TG Therapeutics as a treatment for CLL and multiple sclerosis (MS).

The approval was based on results of the randomized, double-blinded, active-controlled Phase 3 trials ULTIMATE I (NCT03277261) and ULTIMATE II (NCT03277248) evaluating ublituximab (450 mg dose IV every 6 months, following a Day 1 infusion of 150 mg over four hours and a Day 15 infusion over one hour) compared to teriflunomide (14 mg oral tablets taken once daily) in a total of 1,094 patients with relapsing MS for both studies. The primary endpoint was the annualized relapse rate (ARR). Results from the ULTIMATE I and II Phase 3 trials showed that the primary endpoint was met, with a significant reduction of the ARR for ublituximab vs. teriflunomide over a period of 96 weeks. [2] 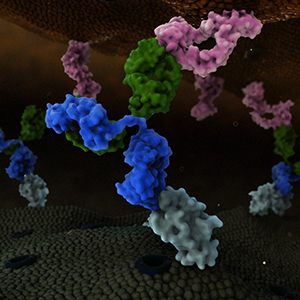 Dupilumab (Dupixent®), an anti-IL-4Ra IgG4 mAb, was granted Breakthrough Therapy designation for moderate-to-severe atopic dermatitis, and the biologics license application was granted a priority review by FDA. The safety and efficacy of Dupixent were established in three placebo-controlled clinical trials with a total of 2,119 adults with moderate-to-severe atopic dermatitis not adequately controlled by topical medication(s). A marketing application for dupilumab is being reviewed by the European Medicines Agency.

First marketing applications were recently submitted for two novel antibody therapeutics, ocrelizumab and inotuzumab ozogamicin, intended as treatments for multiple sclerosis (MS) and CD22-positive acute lymphoblastic leukemia (ALL), respectively. Applications for ocrelizumab (OCREVUS), a humanized IgG1 antibody that targets CD20, as a treatment of relapsing multiple sclerosis (RMS) and primary progressive multiple sclerosis (PPMS) are undergoing regulatory review by the US Food and Drug Administration (FDA) and the European Medicines Agency (EMA). No products are currently approved for both forms of MS. A priority review designation has been granted by FDA, and a first action on ocrelizumab’s biologics license application (BLA) is thus expected by December 28, 2016. The marketing applications are based on positive results from two identical Phase 3 studies (OPERA I and OPERA II) in people with RMS and the Phase 3 ORATORIO study in people with PPMS. All primary and key secondary endpoints were met in these three studies.

The antibody-drug conjugate inotuzumab ozogamicin targets CD22, an antigen found on the surface of cancer cells in most ALL patients. Results of a Phase 3 study evaluating the safety and efficacy of inotuzumab ozogamicin compared with investigator-choice chemotherapy in 326 adult patients with relapsed or refractory CD22-positive ALL were recently published in the New England Journal of Medicine. Improvements over chemotherapy on a number of measures, including complete hematologic remission and progression-free survival, were observed in this study. A marketing application for inotuzumab ozogamicin is undergoing review by the EMA; a BLA submission is likely. Inotuzumab ozogamicin received Breakthrough Therapy designation for ALL from FDA, and priority review of applications is a benefit of the designation, which suggests that an approval by FDA is thus possible by the end of 2016.

The Antibody Society maintains a comprehensive table of approved antibody therapeutics and those in regulatory review (currently 8 mAbs) in the European Union and United States. The antibody target, format and year of first approval are included. Please log in to access the table, located in the Members Only section.

On May 27, 2016 the Food and Drug Administration (FDA) approved daclizumab (Zinbryta®) for the treatment of adults with relapsing forms of multiple sclerosis (MS). The product, which targets interleukin-2 receptor alpha chain (CD25), is manufactured using a high-yield process. Daclizumab (Zenapax®) was first approved in 1997 for the prevention of organ transplant rejection. While the two products have the same amino acid sequence, Zinbryta has a different glycosylation pattern and reduced antibody-dependent cytotoxicity compared to Zenapax. Zinbryta’s approval was based in part on the results of the Phase 3 DECIDE study (NCT01064401) of Zinbryta versus interferon β 1a (Avonex®) in patients with relapsing-remitting MS. In this study, patients administered Zinbryta experienced fewer clinical relapses than those who received Avonex (annualized relapse rate 0.22 vs. 0.39; 45% lower rate with Zinbryta; P<0.001). Due to serious safety risks, FDA has included a boxed warning on the product label, and it is available only through a restricted distribution program under a Risk Evaluation and Mitigation Strategy.

Another antibody therapeutic, ocrelizumab, has been evaluated in a Phase 3 study of patients with primary progressive multiple sclerosis (PPMS). The antibody targets CD20 on B cells, which are implicated in the inflammatory and neurodegenerative processes of MS. Ocrelizumab was granted FDA’s Breakthrough Therapy Designation for PPMS, which is a debilitating form of MS characterized by steadily worsening symptoms. PPMS patients typically do not experience distinct relapses or periods of remission. Currently, no treatments are approved for treatment of the disease. In the pivotal Phase 3 ORATORIO study, treatment with ocrelizumab significantly reduced disability progression and other markers of disease activity compared with placebo. Ocrelizumab is also undergoing evaluation in Phase 3 studies of patients with relapsing-remitting forms of the disease. Genentech plans to submit a marketing application for ocrelizumab as a treatment for MS in 2016. If an application is submitted to FDA by the end of June and receives a priority review, which is a benefit of the Breakthrough Therapy Designation, then ocrelizumab could be approved for marketing in the US by the end of 2016.