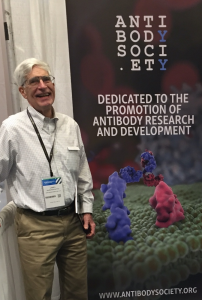 Jim Huston (1945-2020) was a pioneering and visionary antibody engineer; his invention of the single chain Fv (sFv or scFv) antibody was a seminal advance. These genetically encoded molecules could express the vast diversity of antibody repertoires, be used for specific target binding by themselves, incorporated into multifunctional molecules, attached to cell surfaces, or applied in any number of formats relevant to biomedicine. Over the years scFvs became a staple in the antibody field enabling many critical advances.

Jim was one of the first people to see the long-term potential of antibody engineering and recognise how broad the applications could be. Those who had the privilege of interacting with him, benefitted greatly not only from his generosity, enthusiasm, intellectual rigour and encouragement but also from his willingness to share his wisdom and experience. Jim was passionate about disseminating knowledge and education. He served as a scientific advisor to the Antibody Engineering and Therapeutics meetings for three decades and was editor of the annual Protein Engineering, Design and Structure (PEDS) special issue on antibodies. His insistence on scientific quality and education helped stimulate the culture of knowledge sharing between academia, industry and policy makers that is unique to our field. Building on this, he co-founded The Antibody Society in 2007 and was the Founding President and Chairman, remaining an active Board Member until his death. He shared the gratification of many that after a long gestation, antibody engineering and therapeutics are proving so beneficial to human health with the promise of much more to come.

The James S. Huston Antibody Science Talent Award is sponsored by The Antibody Society to recognize and encourage upcoming scientists in the field of Antibody Engineering and Therapeutics. Early career research scientists who have received an advanced degree (Ph.D., M.D., or equivalent) within the last ten (10) years and who are within up to three (3) years after completing their postdoctoral work are eligible for the Award. The scientist is recognized for making important contributions to the antibody field and/or the dissemination of antibody knowledge. Eligibility of the nominee will be checked at time of nomination and before presentation of award. The recipient will be invited to give a lecture on their work, which will be made available on-line on The Antibody Society’s website (https://www.antibodysociety.org). The Award consists of: international recognition of the scientist’s accomplishments, a USD $1500 prize, and registration/travel expenses to the Antibody Engineering and Therapeutics conference in San Diego, CA, which is held in concert with The Antibody Society Annual Meeting.

* The Member is either a Member current on the Society’s annual dues, a student or post-doc eligible for a free membership or a Member eligible through the Society’s corporate sponsorship program.

The nomination package should include the following:

Nominations will be accepted beginning June 15, 2020. Complete nomination packages must be received by 11:59 PM Eastern time on October 15, 2020. Packages must be submitted by email as a single combined PDF file to awards@antibodysociety.org. Incomplete nomination packages or nominations that do not comply with the stated instructions will not be considered. The Antibody Society will not accept materials sent separately or through regular mail. Final award decisions will be at the discretion of The Antibody Society’s Board of Directors.