You are here: Home / Archives for Publication

The Antibody Society is pleased to announce that it has partnered with Taylor & Francis, a leading research publisher, to make mAbs the Society’s Official Journal. mAbs is a multidisciplinary, open access journal dedicated to the art and science of antibody research and development. The journal has a strong scientific and medical focus but serves a broad readership, including specialists in technology transfer, legal issues, investment, and the regulation of therapeutics.

Since 2009, mAbs has published high quality reports, reviews, and perspective articles covering a range of antibody R&D topics, including:

The journal’s 2021 Impact Factor is 6.440 and, in total, articles are downloaded at a rate of over 1 million per year. Articles in the current volume (14) can be found here.

Members of The Antibody Society receive a 10% discount on article publication charges using their member code.

We look forward to a productive partnership with Taylor & Francis.

The Antibody Society is pleased to be affiliated with mAbs, a multi-disciplinary journal dedicated to advancing the art and science of antibody research and development. We hope you enjoy these summaries based on the abstracts of the most read papers published in a recent issue.

All the articles are open access; PDFs can be freely downloaded by following the links below.

In this new Perspective, Dumet et al., present the results from their study of the patent landscape of IgG4 Fc engineering, i.e., patents claiming modifications in the heavy chain. Thirty-seven relevant patent families were identified, comprising hundreds of IgG4 Fc variants focusing on removal of residual effector functions (since IgG4s bind to FcγRI and weakly to other FcγRs), half-life enhancement and IgG4 stability. Given the number of expired or soon to expire major patents in those 3 areas, companies developing blocking antibodies now have, or will in the near future, access to free tools to design silenced, half-life extended and stable IgG4 antibodies.

Parola et al. describe an antibody engineering and screening approach where complete variable light (VL) and heavy (VH) chain cassette libraries are stably integrated into the genome of hybridoma cells by enhanced Cas9-driven homology-directed repair (HDR), resulting in their surface display and secretion. By developing an improved HDR donor format that utilizes in situ linearization, they were able to achieve >15-fold improvement of genomic integration, resulting in a screening workflow that only requires a simple plasmid electroporation. This proved suitable for different applications in antibody discovery and engineering. By integrating and screening an immune library obtained from the variable gene repertoire of an immunized mouse, they isolated a diverse panel of >40 unique antigen-binding variants. They also successfully performed affinity maturation by directed evolution screening of an antibody library based on random mutagenesis, leading to the isolation of several clones with affinities in the picomolar range.

In this new Report,  Sustmann et al. present a generic approach to generate two novel IgG-derived antibody formats that are based on a modification of the CrossMab technology. MoAbs harbor two heavy chains (HCs) resulting in one binding entity and one Fc, whereas DuoMabs are composed of four HCs harboring two binding entities and two Fc regions linked at a disulfide-bridged hinge. The latter bivalent format is characterized by avidity-enhanced target cell binding while simultaneously increasing the ‘Fc-load’ on the surface. DuoMabs were shown to be producible in high yield and purity and bind to surface cells with affinities comparable to IgGs. The increased Fc load directed at the surface of target cells by DuoMabs modulates their ADCC competency toward target cells, making them attractive for applications that require or are modulated by FcR interactions.

Heavy chain (Hc) heterodimers represent a majority of bispecific antibodies (bsAbs) under clinical development. Although recent technologies achieve high levels of Hc heterodimerization (HD), traces of homodimer contaminants are often present, and as a consequence robust purification techniques for generating highly pure heterodimers in a single step are needed. Ollier et al. describe two different purification methods that exploit differences in Protein A (PA) or Protein G (PG) avidity between homo- and heterodimers. Differential elution between species was enabled by removing PA or PG binding in one of the Hcs of the bsAb. The PA method allowed the avidity purification of heterodimers based on the VH3 subclass, which naturally binds PA and interferes with separation, by using a combination of IgG3 Fc and a single amino acid change in VH3, N82aS. The PG method relied on a combination of three mutations that completely disrupts PG binding, M428G/N434A in IgG1 Fc and K213V in IgG1 CH1. Both methods achieved a high level of heterodimer purity as single-step techniques without Hc HD (93–98%). Since PA and PG have overlapping binding sites with the neonatal Fc receptor (FcRn), they investigated the effects of the engineering both in vitro and in vivo. Mild to moderate differences in FcRn binding and Fc thermal stability were observed, but these did not significantly change the serum half-lives of engineered control antibodies and heterodimers. The methods are conceptually compatible with various Hc HD platforms such as BEAT® (Bispecific Engagement by Antibodies based on the T cell receptor), in which the PA method has already been successfully implemented.

Yageta et al examined the small-angle X-ray scattering (SAXS) profile of the glycosylated Fc region (gFc) and aglycosylated Fc region (aFc) in solution to determine if removal of the N-linked glycan alters the CH2 domain orientation in the Fc region. For both gFc and aFc, the best-fitted SAXS profiles corresponded to ones calculated based on the crystal structure of gFc that formed a “semi-closed” CH2 domain orientation. Collectively, the data indicated that the removal of the N-linked glycan only negligibly affected the CH2 domain orientation in solution. Their findings will guide the development of methodology for the production of highly refined functional Fc variants.

Characterization of co-formulated biologics can be challenging due to the high degree of similarity in the physicochemical properties of co-formulated proteins, especially at different concentrations of individual components. In this new report, Cao et al present the results of a deamidation study of one monoclonal antibody component (mAb-B) in co-formulated combination antibodies (referred to as COMBO) that contain various ratios of mAb-A and mAb-B. A single deamidation site in the complementarity-determining region of mAb-B was identified as a critical quality attribute (CQA) due to its impact on biological activity. A conventional charge-based method of monitoring mAb-B deamidation presented specificity and robustness challenges, especially when mAb-B was a minor component in the COMBO, making it unsuitable for lot release and stability testing. The authors developed and qualified a new, quality-control-friendly, single quadrupole Dalton mass detector (QDa)–based method to monitor site-specific deamidation. Their approach can be also used as a multi-attribute method for monitoring other quality attributes in COMBO. This analytical paradigm is applicable to the identification of CQAs in combination therapeutic molecules, and to the subsequent development of a highly specific, highly sensitive, and sufficiently robust method for routine monitoring CQAs for lot release test and during stability studies.

As discussed by Xu et al, development of bio-therapeutics has exhibited exponential growth in China over the past decade. However, no biosimilar drug has been approved in China (CN) due to the lack of a national biosimilar regulatory guidance. HLX01, a rituximab biosimilar developed in China under European Medicines Agency biosimilar guidelines and requirements, was the first such drug submitted for regulatory review in China, and it is expected to receive approval there as a biosimilar product. To demonstrate the analytical similarities of HLX01, CN-rituximab (sourced in China but manufactured in Europe) and EU-rituximab (sourced and manufactured in Europe), an extensive 3-way physicochemical and functional similarity assessment using a series of orthogonal and state-of-the-art techniques was conducted, following the similarity requirement guidelines recently published by China’s Center for Drug Evaluation. The results of the similarity study showed an identical protein amino acid sequence and highly similar primary structures between HLX01 and the reference product (RP) MabThera®, along with high similarities in higher order structures, potency, integrity, purity and impurity profiles, biological and immunological binding functions, as well as degradation behaviors under stress conditions. In addition, HLX01 presented slightly lower aggregates and better photostability compared with the RP. Despite slight changes in relative abundance of glycan moieties and heavy chain C-terminal lysine modification, no differences in biological activities and immunological properties were observed between the RP and HLX01. In conclusion, HLX01 is highly similar to CN- and EU-sourced RP in terms of physicochemical properties and biological activities, suggesting similar product quality, efﬁcacy, and safety. The regulatory requirements interpreted and applied towards the HLX01 marketing application sets a precedent for analytical similarity assessment of biosimilar products in China. 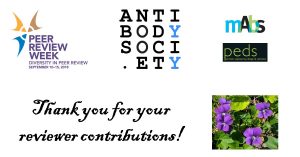 Peer review is an essential part of the manuscript evaluation process, which ensures that relevant, high-quality articles are selected for publication in our affiliated journals, mAbs and PEDS. We would like to thank all reviewers who have contributed their insights and advice for improvement of manuscripts submitted for publication in the journals. These experts invest substantial time and effort in the review of submitted manuscripts, and we sincerely appreciate their valuable input!