You are here: Home / Archives for Bioinformatics

Defeating the coronavirus pandemic will require unprecedented cooperation from the research community. This is especially true for the Adaptive Immune Receptor Repertoire Community (AIRR-C), given the paramount importance of antibodies and T cells for vaccines, diagnostics, and therapeutics in viral infection. Therefore, the AIRR-C hereby calls upon its members, and the wider research community, to share experiences, resources, samples, and data as openly and freely as possible, and to work within their respective systems to break down barriers to achieve this goal, subject to the overarching directives of respect, privacy, and protection for patients and all people. We are in this together. 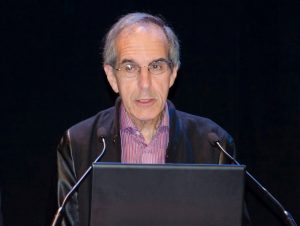 Cyrus Chothia, FRS, (19 February 1942 – 26 November 2019), was an emeritus scientist at the Medical Research Council Laboratory of Molecular Biology (LMB) in Cambridge, UK where he was a fellow of Wolfson College. He studied at Durham University, followed by an MSc at Birkbeck College, University of London, a small college but famed for its involvement in the development of structural biology and x-ray crystallography, being the home of such luminaries as J.D. Bernal, Aaron Klug and Rosalind Franklin. This was followed by a PhD at University College London supervised by Peter Pauling, son of Linus Pauling. Cyrus was one of the founding fathers of structural bioinformatics and made a particular contribution in the antibody field. Amongst others, he worked with Nobel prize winner, Michael Levitt, Joel Janin, Alexey Murzin, Tim Hubbard and Anna Tramontano, but he is perhaps best known for his work with Arthur Lesk. His PhD students included a number of people who have gone on to make major contributions in bioinformatics, such as Alex Bateman, Steve Brenner, Mark Gerstein, Julian Gough, Sarah Teichmann, and Bissan Al-Lazikani.

Back in the early 1970s, Wu and Kabat had demonstrated the presence of hypervariable sequence regions in antibody variable domains that they suggested would form structural loops or complementarity-determining regions (CDRs) that come together in 3D to form the binding site. This was confirmed when Poljak solved the first antibody crystal structure, and it was assumed that the CDRs would also be extremely variable in structure. I first met Cyrus in the late 1980s when I was doing my DPhil in Oxford on modelling antibody combining sites with Anthony Rees. By that time, around eight structures of antibodies, or Bence Jones light chain dimers, were available and Cyrus, together with Arthur Lesk, compared these. They found that, with the exception of the third CDR of the heavy chain (CDR-H3), the structures of the remaining CDRs were remarkably conserved. Further they proposed that the presence of certain ‘key residues’ – either within the CDRs, or packing against them – would define the conformation [PMID: 3090684, 3681981, 2687698]. To be frank, Tony and I didn’t really believe it. After all, there were potentially billions of antibody sequences and they had looked at fewer than 10. Cyrus and Arthur came to visit us in Oxford, and I remember sitting in The Eagle and Child with them discussing these ideas. Cyrus was always modest and completely accepted that they may be wrong, but of course they turned out to be largely correct. As more structures became available, the rules evolved with the importance of other positions being recognized [PMID: 2118959], but the principle was completely upheld. When we published a paper on key residues in 1986, I spoke to him about one of the outliers that appeared not to follow the rules. His view (which was almost certainly correct!) was that the crystal structure was wrong. More recent analysis by ourselves and others has suggested that the rules aren’t always as precise as might once have been thought and the requirements for framework mutations outside the key residues in order to achieve good binding in antibody humanization supports the view that the precise conformation is influenced by other residues and the detail of the environment around the CDRs.

Cyrus introduced a definition of the ‘structural loops’ in antibodies. These are frequently referred to as the ‘Chothia CDRs’, a term that he did not like as, in his view, the CDRs were the sequence-variable regions defined by Wu and Kabat, while his definition related to regions that were structurally variable and he would not presume to redefine what had been done by Wu and Kabat. In fact, his definitions changed over his various papers as more structural information became available. He also introduced the Chothia numbering scheme for antibodies, which was based on Kabat numbering but corrected the insertion sites in CDR-L1 and CDR-H1 to be structurally correct. Unfortunately in 1989, they made an error such that the insertions in CDR-L1 were placed after residue L31 rather than L30. As another example of his humility and modesty, I happened to referee a paper of theirs in 1997 and recognized this error. He guessed that I was the referee, contacted me, and immediately accepted the correction.

While I have focussed on his work on antibodies, he was widely known for his work in many areas of understanding protein structure. He was elected as a Fellow of the Royal Society (FRS) in 2000, for having “shown how the amino sequences of proteins determine their structure, function and evolution”. To name just a few of his contributions, he developed the SCOP classification of protein structure with Alexey Murzin [PMID: 7723011] and the SUPERFAMILY database with Julian Gough. He studied multi-domain proteins [PMID: 15093836], protein packing [PMID: 10388571] and was involved in functional annotation of more than 60,000 cDNAs from the mouse transcriptome [PMID: 12466851]. As well as his work on the conformation of the CDRs, he examined the packing of VH and VL domains in antibodies [PMID: 4093982] and examined the evolution of immunoglobulin domains in general [PMID: 7175935]. With Bissan Al-Lazikani, he published his final paper on canonical classes of antibody CDRs [PMID: 9367782], but then extended this into T-cell alpha-beta receptors [PMID: 10656805].

Cyrus made enormous contributions to our understanding of protein evolution in general as well as of the structure of antibodies. He will be hugely missed by the scientific community, and by me personally. His science and the many well-known scientists who did their PhDs with him or were influenced by him, are a huge and lasting legacy. 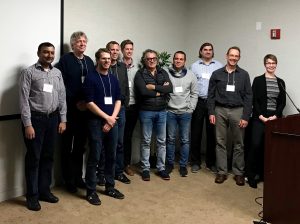 We are pleased and proud to announce the incorporation of the Adaptive Immune Receptor Repertoire (AIRR) Community into the Society.

The AIRR Community is a research-driven group that is organizing and coordinating stakeholders in the use of next-generation sequencing (NGS) technologies to study antibody (Ab)/B-cell and T-cell receptor (TcR) repertoires. Recent advances in sequencing technology have made it possible to sample the immune repertoire in exquisite detail. AIRR sequencing has enormous promise for understanding the dynamics of the immune repertoire in vaccinology, infectious disease, autoimmunity, and cancer biology, but also poses substantial challenges. The AIRR Community was established to meet these challenges. The AIRR Community and its associated meetings and workshops are designed to develop standards and recommendations for: 1) obtaining, analyzing, curating and comparing/sharing NGS AIRR datasets; 2) using and validating tools for analyzing AIRR data; 3) relating AIRR NGS datasets to other “big data” sets, such as microarray, flow cytometric, and MiSeq gene-expression data; and 4) legal and ethical issues involving the use and sharing of AIRR data sets derived from human sources. The proceedings of the workshops, including the recommendations and action plans, will be published to benefit the larger scientific community.

To learn more about the AIRR Community and its work, please explore the items listed under the ‘AIRR Community’ tab above.

Anna Tramontano (14 July 1957 – 10 March 2017), Professor of Biochemistry at the “Sapienza” University in Rome, was an outstanding scientist who made hugely important contributions to our understanding of antibody structure.

She obtained her PhD in physics from the University of Naples in 1980, but then moved to a post doc at the University of California, San Francisco. At a time when molecular graphics meant using specialized hardware – some the size of a small refrigerator – she developed a software package which was later commercialized as InsightII. In 1988, she moved to the European Molecular Biology Laboratory (EMBL) in Heidelberg to work with Arthur Lesk on analysis and modelling of antibodies. Between 1989 and 1990, together with Cyrus Chothia in Cambridge, Anna and Arthur published three key papers on the conformation of antibody complementarity-determining regions (CDRs) [1-3] – a development of the idea of canonical conformations of CDRs first published by Cyrus, Arthur and others in 1986 [4]. At this time, I was doing my D.Phil. in Oxford with Tony Rees on modelling antibodies and, to be frank, we didn’t believe this work!  They were claiming that five of the six hypervariable antibody CDRs adopted only a small number of conformations defined by the length of the loop and the presence of a small number of key residues both within, and outside, the CDRs.  However, this was based on analysis of only about eight available structures from the billions and billions of possible antibodies.  Indeed, when the third of those papers came out [5], our view seemed to be reinforced – it appeared to be an exception to the rules – and we expected that there would be lots of these exceptions in future.  However, with over 1000 antibody structures now available, some enhancements to the simple rules in those papers are still able to predict the conformations of five of the six CDRs with high accuracy.

In the early 1990s, Anna returned to a research institute in Rome that was then acquired by Merck & Co. She was involved in developing methods for designing both inhibitors and proteins and in protein modelling and docking.  She continued to publish in the area of antibodies throughout the 1990s including work on phage display libraries [6-9], modelling [10-13], docking [14] and epitope prediction [15].

In 2001, she became a full professor at the Sapienza University in Rome where she continued her interest in protein structure, but also started to look at RNA molecules and their structure, but hardly published on antibodies again until 2008 when she developed the PIGS server for the automatic prediction of antibody structure [16, 17]. She then revived her interest in antibodies, among other things looking at the structural repertoire of immunoglobulin lambda light chains [18], the association of light and heavy variable domains [19], and mutations in paired light and heavy chains in chronic lymphocytic leukemia B cells [20]. In 2012, she created a database of antibodies together with a set of integrated tools known as DIGIT [21], a complement to servers such as IMGT, SAbDab and our own abYsis. Since then she has developed the proABC server for predicting interactions in antibody-antigen complexes [22], improved the modelling of CDR-H3 [23]; developed tools for antibody humanization [24]; developed methods for profiling antigen regions recognized by serum antibodies from NextGen sequencing [25] and methods for comparison and clustering of antibody binding sites [26].

Anna was a Fellow and Vice President of the International Society of Computational Biology (ISCB), which is responsible for the largest international bioinformatics conference (Intelligent Systems for Molecular Biology (ISMB)). She was also an organizer of the European Conference on Computational Biology (ECCB) and, with John Moult, of the Critical Assessment of Structure Prediction (CASP) experiment held every other year to assess progress on protein modelling.  She was passionate about training in Bioinformatics and about encouraging young scientists.

Here I have focussed on her work on antibodies, but she was hugely influential in many areas of Bioinformatics. She will be greatly missed by the scientific community, and by me personally. She was always very supportive of my research and nominated me as an expert on the nomenclature of antibody-based drugs to the WHO-INN. Her science and the scientists that she has mentored and trained will remain as her lasting legacy.