You are here: Home / cancer / Discovering and Targeting Neo-epitopes in Cancer 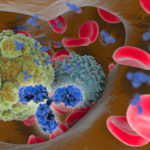 Antibody Engineering & Therapeutics, held in December 2021, offered many opportunities to hear exciting and informative presentations by experts in the field. We are pleased to present here a summary of a plenary lecture by Prof. James Wells (USCF), kindly written by Dr. Czeslaw Radziejewski.

Professor Wells presented the plenary lecture on the identification of cancer-associated proteolytic neo-epitopes in cell membrane proteins and the identification of novel cancer-specific MHC-1 peptide complexes. Cell surface proteins are the targets of most biologic and small molecule drugs. Professor Wells and colleagues use cell surface proteomics to examine changes in the cell surface proteins upon transformation with oncogenes such as KRAS, HER2, EGFR, BRAF, MEK, and Myc. Ecto-domains of identified proteins, which generally belong to the single pass trans-membrane class, are expressed as Fc fusion proteins and antibodies are generated against these proteins via screening phage libraries. Specificities of the antibodies are verified by testing against full-length trans-membrane proteins expressed by cells transfected with appropriate vectors.

Proteolysis is a primary post-translational modification of cell surface proteins. There are approximately 500 human proteases, and proteolysis plays an important role in disease progression, such as angiogenesis, invasion and metastasis, inflammation, and immune evasion. Well’s lab is exploring methods to identify proteolytic cleavage sites on the surfaceome of cancer cells.[1] To accomplish this, they devised a technology called N-terminomics, which uses the peptide ligase called subtiligase. Subtiligase ligates peptide esters to the N-terminus of a protein or a peptide. This enzyme can be used for other purposes, such as peptide cyclization and protein bioconjugation. The lab used peptides tagged with biotin or fluorescently labelled in conjunction with mass spectrometry to identify sites of proteolytic cleavage.[2,3] Prof. Wells showed an example of this strategy used to identify sites of cleavage by caspase in the proteome of a human cell line in which apoptosis was induced. This approach, however, identified only a limited number of cleaved proteins. In the next implementation of the strategy, cells were directly transfected with subtiligase. This strategy allowed the identification of hundreds of extracellular proteins that were proteolytically modified.

The newest strategy invented in Prof. Wells’ lab (unpublished) involves tethering subtiligase to glycans of cell surface proteins instead of transacting cells. Using this latest strategy in Kras-transformed cells, 611 cell surface cleavage events were observed. In HER2-transfected cells, 267 cleavage events were observed and the majority of events were not related to cleavage of signal peptide from extracellular proteins. Interestingly, the extent of proteolytic modification of some proteins in oncogene-transformed cells can either increase or decrease. Similarly, expression levels of the same proteins also change in both directions. N-terminomics of Kras- and HER2-transformed cells was thus different.

This study also identified an interesting protein called CDCP1, which has cleavage and expression that is upregulated in pancreatic cancer. The cleavage is indeed specific to cancer cells. Three closely nested cleavage sites were found in CDCP1. Antibodies (CL03.2) were developed in the lab against the cleaved form  of CDCP1. Cells containing the cleaved form were efficiently killed by the anti-CDCP1 antibody formatted as an antibody-drug conjugate (ADC). In Jurkat cells, an anti-CD3/anti-CDCP1 bispecific single-chain variable fragment showed killing activity. For in vivo studies, mouse-specific antibodies toward the truncated form of CDCP1 were generated and used to produce an auristatin (MMAF)-based ADC. An ADC against the truncated form of CDCp1 was well tolerated in non-tumor-bearing mouse, but the animals lost weight when treated with an ADC targeting the full-length protein. In a study of mice bearing xenograph tumors, the animals were administered antibody against the truncated form that was radiolabeled with isotope Lu 177 and a dramatic decrease of tumor growth was observed.

In the second part of his presentation, Professor Wells talked about identifying and attacking peptide-MHC targets with engineered bispecific T-cell engagers (BiTes) and CART-T cells. The goal is to build antibodies to peptides-MHC complexes unique to cancer and then use armed BiTEs or CAR-T cells to attack cancer cells. MHC class I load peptides that result from digestion of proteins in the proteasome. These complexes, when displayed on the cell surface, are attacked by cytotoxic T-cells. MHC complexes can be immunoprecipitated with pan-MHC antibodies and the peptides identified using mass spectrometry. Every individual has 6 different MHC alleles, but some, like A*02:01, C*07:01 and few others, are more frequently found in human population but with different distribution among races. Using pan-specific antibodies requires a high number of cells for immunoprecipitation and does not give information regarding which peptide is associated with which particular allele. Prof. Wells’ lab developed an approach that uses MHCs as Fc fusion proteins that are secreted by cells together with specific peptides. sHLA-A*02:01 and sHLA-B*35:01 indeed were efficiently secreted by cells. The secreted form of HLA A*02:01 brought down with them exactly the same peptides as previously published, which validated this approach.

The lab is investigating changes in the immunopeptidomics of hypoxic pancreatic cancer cells vs normoxic normal cells. Oncogenes suppress MHC expression, which makes recovery of complexes more difficult. However, Prof. Forest White and colleagues at MIT found that MEK inhibitors resets MHC expressions to normal levels. Using MEK inhibitors, Forest’s group identified peptides from HLA. A*A:0201 that were upregulated on melanoma cells. Through screening a phage library, Prof. Wells’ lab found antibodies that specifically bound to the complex of the MHC-1 with specific peptides and then showed that the antibodies bound cells with peptide-loaded MHCs.