Although cancer is often the focus of attention, antibody-based drugs are developed and approved for many other indications, such as immune-mediated, neurological, ophthalmic and skeletal disorders, as well as cardiovascular/hemostasis, respiratory and infectious diseases. Antibody therapeutics for diseases other than cancer comprise slightly over half (58%) of all  antibody products granted their first approval in either the US or European Union (EU), and they comprise approximately half (48%) of the late-stage commercial pipeline. [1]

Despite the success of antibodies for non-cancer diseases, the percentage of these molecules entering first-in-human studies has recently declined [Figure 1]. 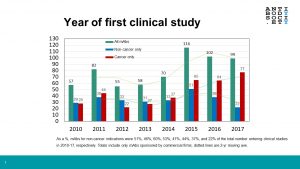 Whereas during 2010-2014 antibodies for non-cancer diseases comprised 46-60% of all antibodies entering clinical study each year, they have comprised a declining percentage in all subsequent years (44%, 37% and 22% in 2015, 2016 and 2017, respectively). It must be noted that there was a substantial increase in the total number of antibody therapeutics entering clinical studies during the 2015-17 (ave. 106/year) compared to 2010-2014 (ave. 64/year). Nevertheless, the number of antibodies for non-cancer diseases that entered studies in 2017 was the lowest (so far) in this decade. One reason for this decline may be the current focus of research on antibodies that modulate immune checkpoints or redirect T cells and on immunoconjugates such as antibody-drug conjugates, which are almost exclusively developed as treatments for cancer. While the number of antibodies for non-cancer diseases in Phase 2 studies (~130) is likely sufficient to replenish the number in Phase 3 studies and regulatory review in the short term,  early-stage studies of more will be needed to sustain the flow of these therapeutics onto the market well into the future.

Like this post but not a member? Please join! Membership is free for students, post-docs and employees of the Society’s corporate sponsors.