You are here: Home / Uncategorized / First approval for caplacizumab 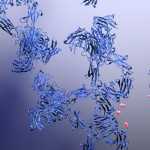 On September 3, 2018 Sanofi announced that the European Commission granted a marketing approval for caplacizumab (Cablivi), a bivalent single-domain Nanobody targeting von Willebrand factor, as a treatment of adults experiencing an episode of acquired thrombotic thrombocytopenic purpura (aTTP). During episodes of this rare, life-threatening blood clotting disorder, microclots can form, leading to low platelet counts, ischemia and organ dysfunction in aTTP patients. Caplacizumab was granted Fast Track designation in the US and orphan drug designations in the US and EU for the treatment of aTTP. The biologics license application (BLA) for caplacizumab is undergoing a priority review at the US Food and Drug Administration (FDA). A first action by FDA is expected by February 6, 2019. Caplacizumab was developed by Ablynx, a Sanofi company.

The approval of caplacizumab in the European Union was based in part on the Phase 3 HERCULES study (NCT02553317), a placebo-controlled, randomized study to evaluate the efficacy and safety of caplacizumab in more rapidly restoring normal platelet counts as a measure of the prevention of further microvascular thrombosis. Positive results from this study were announced in October 2017. The HERCULES study recruited 145 patients with an acute episode of aTTP who were randomized 1:1 to receive either caplacizumab or placebo in addition to standard-of-care treatment, which was daily plasma exchange (PEX) and immunosuppression. Patients were administered a single IV bolus of 10 mg caplacizumab or placebo followed by daily SC dose of 10 mg caplacizumab or placebo until 30 days after the last daily PEX. Depending on the response, the treatment could be extended for additional 7-day periods up to a maximum of 28 days. The primary endpoint (time to platelet count response) and several secondary endpoints of HERCULES study were met. In particular, there was a statistically significant reduction in time to platelet count response, with, at any given time, patients treated with caplacizumab 50% more likely to achieve platelet count response;  a 74% relative reduction in the percentage of patients with aTTP-related death, a recurrence of aTTP, or at least one major thromboembolic event during the study drug treatment period; and a 67% relative reduction in the percentage of patients with aTTP recurrence during the overall study period. A 3-year Phase 3 follow-up study (NCT02878603) of patients who completed the HERCULES study is in progress.

The Antibody Society maintains a comprehensive table of approved mAb therapeutics and those in regulatory review in the EU or US. As of Sep 3, a total of 7 antibody therapeutics had been granted first approvals in either the US or EU in 2018, and marketing applications for another 9 that have not yet been approved in either the EU or US are undergoing review in these regions. Please log in to access the table in either PDF or Excel formats, located in the Members Only section.