Saint Peregrine and the programmable bacilli: Nanobodies and the bacteria that make them.

If I asked you to think of medieval Italy, I imagine politics, intrigue and misbehaving Popes spring to mind, and cancer immunotherapy wouldn’t occur to you at all. And yet, Saint Peregrine Laziosi (1265-1345) may just be history’s earliest recorded case of tumour regression prompted by immune response.  He developed a malignant tumour in his tibia, which broke through the skin and became horribly infected. So purulent and vile was the wound that one contemporary wrote “such a horrible stench was given off that it could be endured by no one sitting by him”. Indeed, prior to chemotherapy and antibiotics, this double whammy of cancer and infection was likely to prove fatal. And yet, Peregrine’s cancer regressed completely, never to return (1). Why would infection cause tumour regression? And what has this to do with the immune system? It would be centuries before these questions were even pondered, and indeed, we are still answering them today.

Our story fast forwards now to 19th century New York, and the work of surgeon William Coley. In an era before chemotherapeutics and far from the high-tech monoclonal antibodies (mAbs) of today, surgery ruled over all late-1800s cancer therapies. The results were hit-and-miss however, and Coley had seen first-hand how patients succumbed to cancers that were entirely resected without evidence of distant metastases. In one patient, sarcoma in the neck had been operated on numerous times over the preceding years, until at last the case was considered hopeless. A fortnight after the surgery however, the patient’s remaining tumour became severely infected with Streptococcus pyogenes, and regressed entirely. The wound healed and the patient was found to be healthy and well at seven years follow up (2). Soon thereafter, Coley began injecting patient’s tumours with bacterial cultures in an attempt to mimic natural infection, and noted several remissions. The technique wasn’t perfect, as one patient died of the fever induced by the bacteria. 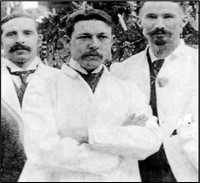 Despite successes, use of Coley’s method declined. Surgery became increasingly sterile, and infection more avoidable with the invention of antibiotics. Radiation, surgery, and eventually chemotherapy became the mainstays of cancer treatment, as they were at once efficacious and standardisable. And yet, Coley’s technique was successful, and increasingly, basic and translational research supports the utility of the immune response in targeting malignancy. To understand this immunotherapy renaissance necessitates an examination of modern targeted therapies, in particular the enormously successful mAbs.

I imagine that you have never had Ebola virus (I certainly haven’t). Nevertheless, both you and I have premade immune cells capable of responding to Ebolavirus and essentially all other possible diseases, including cancers. This isn’t because our immune systems “know” what Ebola looks like per se, but that the immune system is designed to respond to a staggering array of molecular shapes called antigens, and in theory can learn to recognise practically any pathogen or cancer. Proteins called antibodies respond to antigens by tightly binding to them, causing pathogens to clump together, and marking them for eradication by immune cells. Contrastingly, mAbs are manufactured outside the body, and are administered to affect similar immune responses against a desired molecule. When Köhler and Milstein invented hybridoma technology that rendered large-scale mAb manufacturing feasible in the mid-1970s, they noted that this “could be valuable for medical and industry use” (4). How prophetic this notion seems now.

With a reliable production method now available, researchers still had to identify targets that clearly demarked cancer from self, so that antibodies would direct eradication of cancer while sparing healthy tissue. By the late 1970s, Nadler and colleagues had done just this, generating a mAb called ab89 that successfully targeted lymphoma cells while sparing normal cells. They did this by inoculating rats with tumour cells, and isolating their antibody producing plasma cells, which could be used to manufacture therapeutic mAbs using Köhler and Milstein’s method (5). Soon after, they had tested ab89 in a patient with non-Hodgkin’s lymphoma, and showed tumour cells were transiently decreased. In keeping with the prophetic, but understated, writing of early antibody scientists, these authors ended their paper by surmising that it is possible mAbs may eventually be used successfully for immune therapy, and might act to deliver toxic drugs directly to tumours (6). Subsequently, Nadler et al. have been proven right, and mAbs have taken their place in the arsenal of therapies at the disposal of modern oncologists. Indeed, different antibodies are indicated in a staggering array of malignancies, and can even be conjugated with highly toxic drugs to potentiate their tumour destroying capacities (7). And yet, for all their specificity and elegance, these drugs are no panacea.

All immunoglobulins great and small.

From ancient Italy and Victorian New York, our story turns now to the immune systems of the camels. Interestingly, camelid (that is, camels, alpacas, and llamas) immune systems produce rather strange antibodies, being much smaller than our own, and lacking short chains. Their tiny size renders them able to penetrate deeply into tumours and capable of crossing the blood brain barrier, a significant roadblock for mAbs that target the central nervous system. Where our antibodies are modified by glycosylation, a process requiring complex animal cells, nanobodies are not and therefore can be produced by bacteria, rendering them cheaper and easier to manufacture (8). While mAbs, can be exquisitely targeted and are essential in modern cancer therapies, they are far from perfect, and the unique properties of nanobodies render them potential future usurpers of mAbs.

A nanobody’s small size is at once its herculean strength and its Achille’s heel. While miniscule nanobodies might penetrate deeply into tumours, they are also rapidly cleared by the kidneys due to their size, necessitating both higher and more frequent doses (9). Perhaps it’s time we turned back to the bacilli? While Coley never possessed means of controlling the bacteria he administered to patients, we most certainly do. As drug delivery systems, bacteria have a lot going for them. We may easily edit their genetics to turn them into autonomous drug making factories. They can move towards chemical signals, and thereafter produce toxins, cytokines, and tumour antigens to drive the immune system’s recognition of the tumour. They can be manipulated by external cues we control, and of course, they can produce nanobodies (10). Indeed, recent evidence has demonstrated just this, with fascinating results.

At last, our story arrives at the lab of Tal Danino. Danino’s work focuses on the manipulation of living things to engineer new organisms with useful properties. Like a coder, Danino started by inventing a genetic circuit that allowed bacterial populations to synchronise their gene expression. The bacteria all produced a chemical called the autoinducer, which potentiates expression of a fluorescent protein. As the concentration of autoinducer rises, the bacteria produce more and more fluorescent protein until at last, the autoinducer forces the expression of a protease that inhibits the entire circuit. Without inhibition, autoinducer is expressed again, starting the whole process anew. When Danino et al. tried this experimentally, they saw fluorescence ebb and flow in a tell-tale sign that the circuit was working (11). It was time to try these bacilli out in cancer.

Cancer cells employ underhand means to evade immune detection, such as over expression of CD47, a molecule that acts as a “don’t eat me signal” for our innate immune cells. Recently, a mAb was designed to bind tumour-expressed CD47 to potentiate anti-tumour immunity, and while the antibody showed efficacy, it caused anaemia and thrombocytopenia in some patients (12). This prompted Danino’s lab to postulate that anti-CD47 nanobodies delivered via bacteria might mitigate these side effects because of their rapid clearance from the blood. They designed a new genetic circuit for this experiment. Here, the bacteria expressed an autoinducer to coordinate their gene expression, but this time they produced an anti-CD47 nanobody. Instead of a protease, the circuit breaker was a protein that caused the bacteria to burst open, spilling their drug-laden contents into their surroundings (Figure 2.)(13). The stage was set for autonomous, intratumoral, nanobody factories. 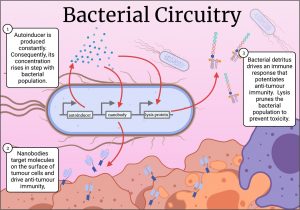 Figure 2. The lysis circuit in action. Bacteria are programmed to produce nanobodies, while also lysing en masse, resulting in a population that ebbs and flows while continuously generating nanobodies. Figure generated in Biorender.

Releasing the nanobody into the tumour potentiates its therapeutic effect without the need for systemic delivery, perhaps mitigating off-target toxicity. Moreover, release of bacterial contents into the tumour itself alerts the innate immune system, perpetuating an antitumour immune response. Indeed, the results of a proof-of-concept experiment corroborate just this, with tumours treated with placebo showing a high growth rate. Tumours treated with bacteria that lyse and do not release nanobodies showed reduced tumour growth, but bacteria that both lysed and released nanobodies almost completely arrested tumour growth. Tumours injected with the nanobody-producing bacteria shrunk, and untreated tumours elsewhere in the mouse showed stunted growth, demonstrating the bacteria induced both cancer cell death, as well as potentiating an immune response capable of recognising the same cancer elsewhere in the body (13). A year later, this group replicated these findings, this time using bacteria that produced nanobodies that blocked immune checkpoint molecules PD-L1 and CTLA-4. Mice treated with bacteria producing both nanobodies showed complete survival after 40 days of tumour incubation, at which point, only 40% or fewer control mice survived (14). These two papers demonstrate the enormous potential of bacterial nanobody delivery.

Two papers, however, do not evidence-based-medicine make. Concerted basic and translational research is necessary to demonstrate these interventions are fit for human trials, and only then can we ascertain their fitness for the oncologist’s arsenal. Nevertheless, what an exciting time this is in the history of cancer immunotherapy! Where once serendipity saw bacteria potentiating anti-cancer immunity, we are finally in a position to realise the bacteria’s potential as delivery systems of immunotherapeutic nanobodies.  Myths say that at the Trojan war’s end, Odysseus entered the city in a fabled wooden horse, and thereafter laid waste to his enemy. Perhaps we will soon lay siege to tumours in much the same way.