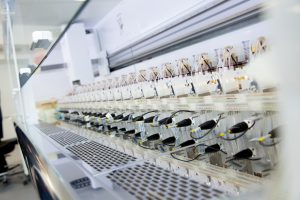 The discovery and development of antibody therapeutics often adheres to a series of stages starting with target identification and progressing through lead generation, lead optimization, then testing in preclinical and clinical studies. Molecular biologists engineer antibodies during lead generation and optimization to improve a range of characteristics, including antibody specificity and potency, or to reduce immunogenicity and the rate of elimination from the body (1).

Next-generation antibody biopharmaceuticals include bispecifics, glyco-engineered antibodies and antibody-fusion proteins with complex architectures. While drug development scientists may use antibody engineering techniques to generate candidates with very desirable or improved functional properties, at the same time, these can alter the biochemical, biophysical and in vivo properties of the antibody candidate, which can be detrimental to the overall target product profile (2). Engineering antibodies to improve their functional properties is frequently performed without consideration for the subsequent developability, including manufacturability, of the molecule. These issues are then often identified at a relatively late stage in the discovery process, after substantial resources have been invested in the molecule and, therefore, can have a real financial impact on drug development companies that may be being kept alive by funding from investors.

Ideally, antibody therapeutics should be capable of being manufactured with high productivity and at high quality with low protein heterogeneity. From a developability perspective, it is preferable if they express to high titer from the mammalian cell expression system and are stable during production storage and delivery (1). Some antibody candidates can exhibit a propensity to partially unfold, revealing hydrophobic patches that are more normally buried inside the molecule. Once revealed, the patches can interact with one another, leading to aggregation. Other liabilities that reduce developability include low solubility, unstable amino acids, clipping and antibody fragmentation (1). These can be sufficiently severe that projects can be cancelled due to poor toxicology data and concerns around whether the candidate can be safely administered to patients during clinical trials.

One solution, advocated by investigators from Roche (2), is to assess developability during antibody drug discovery. Their workflow incorporates two separate assessments, the first following the initial candidate screening and selection and the second following humanization and re-engineering, but before the selection of the clinical lead. During the first phase of the assessment, complementarity-determining regions are analysed in silico for potential liabilities such as degradation sites. This can be followed by studies on stressed samples, with samples incubated at elevated temperatures for two weeks. Stable candidates can progress to the next stage or drug development scientists can use humanization and protein re-engineering to remove the identified liabilities. The second phase, which follows humanization, again employs in silico tools but evaluates the whole humanized molecule and assesses potential hotpots where post-translational modification, charge variations or degradation might occur. Researchers then perform a second stress test for the most likely or detrimental liabilities. During this phase, they can include tests for self-interaction and aggregation, such as apparent hydrophobicity by hydrophobic interaction chromatography, thermal stability by dynamic light scattering (DLS), protein-protein self-interaction by DLS and viscosity at high concentration by DLS with latex beads (2).

Other groups have gone further, and not only select for candidates with properties that limit manufacturing and storage risks, but also apply molecular engineering techniques in order to improve manufacturability proactively. For example, in 2019, a team from AstraZeneca described manufacturing challenges they encountered during downstream purification of an antibody that was undergoing liquid-liquid phase separation (3). This in turn resulted in the need for longer mixing times that can be damaging for proteins, yield losses, increases in pressure during processing and misleading analytical results from in-process samples. The team attempted to resolve the problem by optimize the bioprocessing conditions, but there were still substantial limitations to large-scale manufacturing. To fix the problem, they used in silico homology modelling and charged-patch analysis to identify problematic residues, and this ultimately lead them to substitute charged residues with those with a neutral or opposite charge. Their research showed that these substitutions minimized electrostatic interactions and allowed them to engineer a variant that maintained antigen-binding affinity, but eliminated the liquid-liquid phase separation behaviour.

The molecular engineering of therapeutic antibodies is allowing development of candidates with ever improved functional properties. However, researchers should consider, where possible, the impact of this engineering on the biochemical and biophysical characteristics of the molecule, which can have a negative effect on the developability of lead candidates. Incorporating screens for developability during drug discovery workflow can help eliminate candidates with liabilities that will prevent them from being successful drugs. The more sophisticated developers of antibody therapeutics are cleverly applying molecular biological techniques to improve the stability and manufacturability of their monoclonal antibody leads.

The Antibody Society is an authoritative source of information about antibody therapeutics development. We are pleased to provide original posts and news summaries on our homepage, as well as semi-monthly summaries of recent news to our members.  Archived news from 2019 can be found in the Web Resources section of the Society’s website.